ISBerne takes community service to the streets…and to the world.

An important part of the International School of Berne’s curriculum and culture is the development of a sense of global citizenship in their students. In this post, we hear from 12th grade student Nathalie Rahlenbeck,

who provides an excellent account of her participation in the Terre des Hommes event to raise awareness and funds for an organization that improves the lives of street children. We also feature Dr. Kathleen Noreisch, director of the CAS (Creativity, Action, Service) program at ISBerne. CAS provides the opportunity for students to work on a variety of social responsibility initiatives including Mary’s Meals, an international movement that provides food projects in communities where hunger and poverty impair the ability to receive an education, and Velos für Afrika, a Swiss organization that repairs and sends bicycles to Africa to promote local mobility. The ISBerne CAS program also allows students to work on some very ambitious field projects in the developing world.

We hope that you’ll enjoy this message of goodwill and international fellowship during the holiday season, and that you’ll show your support for the students’ committed work by sharing, commenting on, and “liking” this post. Ms. Rahlenbeck’s insightful editorial follows. -Richard Lakin

On Wednesday 21st November, ISBerne Grade 5 and CAS students from Grades 11 and 12 participated in the fund raising activity “Strassenkind fur einen Tag” to support the organization Terre des Hommes. Students wearing distinctive orange hats emblazoned with the name of the charity walked around the

Hauptbahnhof area of Bern selling chocolate bars, baked goods and performing music to both raise money and awareness.  One man in the street liked the hats so much that he offered 10 CHF for one!   The idea behind “Strassenkind fur einen Tag” is for students to assume the role of a street child and to perform the typical work which they must do to survive, from selling newspapers, cleaning car windows and shoes, and asking for money.  This activity takes place every year around the 20th November as on this date in 1989 the UN Children’s Rights Convention was adopted.

Terre des Hommes’ mission (visit their website ) is to develop and implement projects designed to improve the living conditions of disadvantaged children in their own environment while bringing attention to their needs to the public. 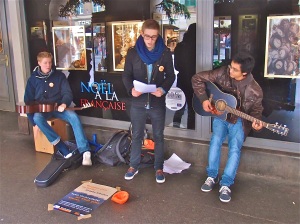 ISBerne students spent two weeks getting ready for this event, preparing items for sale and learning about the organization.  The day itself presented many challenges, from the low temperatures to the attitudes of people the students approached asking for donations.  Students were surprised that some passersby were indifferent, or in some cases even mocked their appeals for donations.  They tried different strategies to make their efforts successful, including changing their original approach from asking “Helfen Sie die Strassenkinder” (‘help the street children) to asking people to “donate to Terre des Hommes” when they realized that people might be thinking they were asking for money for themselves.  In the end they raised the impressive sum of 1020 CHF.

It is experiences like this that allow ISBerne students to apply what they learn at school to the wider world.  In the four hours that they were out on the streets they were able to get a glimpse of the hardships that face children who do not have a safe and comfortable home to go to and how their poverty makes them almost invisible to people passing by them on the streets.  The CAS (Creativity, Action, Service) aspect of the IB Diploma Programme requires just this kind of outreach as it encourages students to take “seriously the importance of life outside the world of scholarship, providing a refreshing counterbalance to academic studies” (from the IBO website).

Dr. Kathleen Noreisch who accompanied the students reflected on their experiences, saying “Initially some of the students were wary about speaking to strangers and asking for donations, 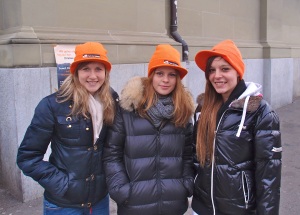 but it was clear that as the day progressed they were buoyed by their positive experiences and even more motivated to keep at it after experiencing unfriendly responses. I think it was a very valuable experience for the students – not only in terms of reflecting on what it must be like for less fortunate children who are forced to work every day but also in terms of the way in which the students themselves will react to other charity workers who address them in the future. Overall, I am extremely proud of the students and the hard work that they put in on a cold, November day.”

In the video below, Dr. Kathleen Noreisch outlines the scope of the ISBerne CAS program

Follow the ISBerne blog to read about upcoming events at the school.

2 Comments on “ISBerne takes community service to the streets…and to the world.”

This blog chronicles student life at the International School of Berne, a full-time, fully accredited international day school serving students in grades pre-K through 12. We invite students, teachers, and other education professionals to follow the story of this innovative school in Berne, Switzerland.

Visit our school website to learn more about ISBerne, an international school in the heart of Switzerland!

Visit the ISBerne Online website to learn more about our online learning program.

Our sister school in Dubai, UAE